As we speak I can hear helicopters above our house.I live less than 3 Kilometres away from the place in question…The Westgate Mall. Imagine yourself going for frozen yoghurt with a friend or your fiance,going shopping for groceries with your 2 yelling infants or heck just stopping by for what you think will be 10 minutes tops to withdraw money from the ATM,right? …WRONG.Unfortunately that’s not what happened to the innocent civilians who were at Westgate having a good time or going about their business.It was and still is hell.

Yesterday on Saturday September 22nd 2013 at about noon,an estimated 10-15 armed people(a woman/women included) went to the Westgate Mall in Nairobi and started shooting randomly and throwing grenades according to eyewitness reports. Once you hear gunshots,you hide and that’s what survivors did. The police who arrived managed to liberate some 1000 people from the mall until evening but no one came out after that.Some 3 hostages have managed to escape this morning but an estimated 30 people are still in the dreaded mall as I type this. Children were not spared as fire was opened callously on them. So far 59 people have lost their lives and the death toll is still rising while 179 + people have sustained an array of wounds. The deceased range from the ages of 2 to 78. The assailants asked people questions to prove they were Muslims. If you’re no Muslim they shot you,if your phone rang…they shot you too. :'(

People running out of the mall to safety:

I almost cried I saw this mom hiding with these babies:

This one made me cry too.A security personnel rescuing an unknowing baby and other civilians: 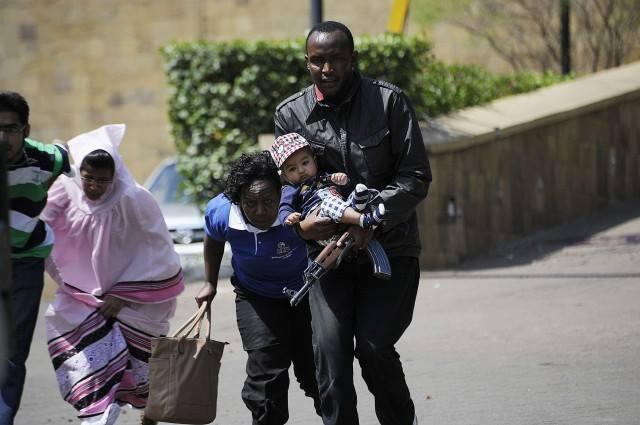 This brave unsuspecting child kept running but the policeman was beckoning her to keep her from harm:

In the line of duty:

I’d rather not post photos of the injured and deceased that I’ve seen so much of. Some people have found out their loved ones have passed on,through the internet.Their photos are all over! What a way to break it to someone…

And who’s claiming responsibility? The Al-Shabaab ,a terrorist organization from Somalia. I’ve frequented that mall in the past and I’m trying to imagine if I was in there,what I would do…Survivors have recounted horrific scenes, some saying the had to sleep under a car on the cold hard floor in the basement parking,clinging onto that glimmer of hope that they will be indeed rescued.One jumped from the 1 st floor to the ground floor just to escape and others played dead in a bid to stave off their attackers. If you’re Kenyan you’ve seen it all on TV.I have been deeply saddened by the current despondent state of affairs. The security agencies that are there are doing their best to deliver the remaining civilians from the hands of their attackers.Kenyans in their generosity  have turned out in mammoth crowds to donate blood and other supplies where needed and I am deeply touched.I’m also planning to donate my blood as soon as the situation is contained since I live near Westgate Mall.

The aftermath of this horrid experience is traumatised children,grief,paranoia…But our president said something very powerful ” Terrorism is a philosophy of cowards” and it’s true.Terrorrism is of no religion…It is of cowards. We have never had a hostage situation in our country but I’m proud of our brave armed forces’ handle on the situation. If you’re out there reading this,keep us in your prayers.We shall overcome.That is all.

Tell Me What You Think Cancel reply

Get new posts delivered to your inbox