I can count on one hand  the number of running shoes created by a Kenyan brand. Enda. And that’s pretty much it.

My journey through the internet led me to Enda. And here we are.

Kenya is known for its safaris and its running. Enda is about the latter. They teamed up with Kenyan athletes to create the ultimate running shoe. The ENDA ITEN. It was called ‘Iten’ because Iten is a town in Kenya known for its great running champions.

Introducing the Enda Iten. A shoe that incorporates the Kenyan heritage in its colours,logo(a spear head), the word “Harambee” on it, 12(12/12 which is the date Kenya gained independence), the Great Rift Valley and the Geometric patterns found in many Kenyan fabrics.

Let me break it down for you real quick.

1.The colours of the Kenyan flag : Black, red and green.

The Itens come in black, red and green variations.

2.The logo is a spear head.

The spear forms a part of Kenyan history and is even in the Kenyan flag. How simple and cool is this logo though?

Harambee as the motto of Kenya is inscribed onto the sole. It means “Pull together” 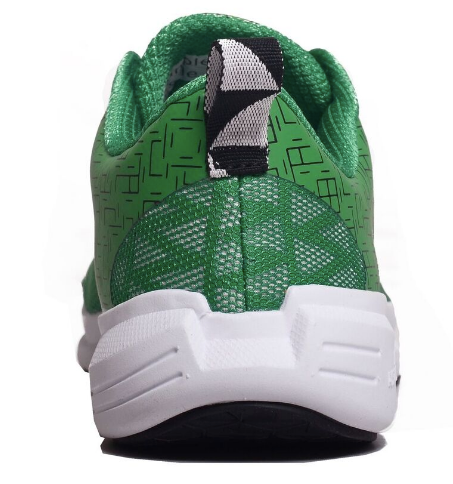 Enda is the brainchild of Navalayo and Weldon. I got a chance to interview them. Here’s what they told me:

-ENDA. Quite the creative name if I do say so myself. Who are the founders of the brand?

Navalayo : Enda was co-founded by Navalayo Osembo-Ombati and Weldon Kennedy. A graduate of the London School of Economics, Navalayo has worked in different places around the world, including the US, UK, Ethiopia, Tanzania and Kenya. She is a trained accountant and lawyer. Weldon on the other hand is a social-change campaigner who has worked on a range of early stage social change startups. He built the student and international member programs at The ONE Campaign and most recently led Change.org’s growth in Europe as the regional Managing Director. An avid runner and running shoe obsessive, his half marathon PB is 1:37:39.

-When did you start ENDA and what brought about the idea?

Navalayo : Enda as an idea has been in existence for about 18 months now. We met at a pitching competition where I was presenting the concept of a sports academy where children gifted in sports could be groomed into champions without compromising their education. We discussed different ideas on the importance of sports in development and Enda is a product of that conversation. We recognized the latent potential of Kenya’s excellent reputation in running and decided to develop a running shoe that not only espouses the great running spirit of Kenya, but also provide a means through which the country can benefit from the global running industry.

Navalayo : There are lots of technical aspects that make the Enda Iten really stand out. It’s got just the right amount of cushion to make for a comfortable run, but not so much that you’re sacrificing flexibility. And the way the midsole cups the heel really makes the shoe stand out. When running across a grassy hill, the shoe stays with your foot and you don’t slide around at all.

Of course, beyond that, it’s a Kenyan running shoe. In addition to being the home of the human species some 60,000 years ago, Kenya is unique because running is something that Kenyans have understood and perfected over the years. That authenticity – that we know what we are talking about – is what makes us confident that we can compete. 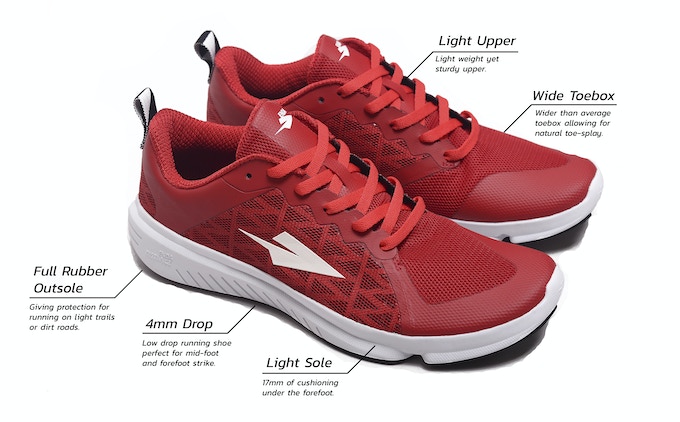 -How much will the shoes go for?

Navalayo : The shoes are retailing for $100

-What are your plans with regards to expanding the current collection? Do you plan on coming up with new designs in future?

Navalayo: We’re starting with just a single excellent shoe, but we realize it’s not for every runner for every run. The Enda Iten, our first debut design, is the first of many.  We want to have a full diverse product line including a more cushioned trainer, racing flat, and trail shoe. It would be great to see these shoes on the feet of runners around the world, helping them find a bit more joy and perhaps speed in their run, all while creating hundreds of jobs in Kenya.

-What are some of the challenges you have encountered so far in trying create Kenya’s first running shoe?

Navalayo: The toughest challenges have been those I would imagine any start-up faces. We’ve been very lucky to find great suppliers who have been willing to take a risk on working with a small start-up like us. But we still needed money for all the legal setups, design, and prototyping. It’s exciting to be moving out of prototyping phase and heading towards production. Secondly, it’s challenging to source all our raw materials in Kenya. For example, the material we need to create the midsole of the shoe is not available locally. While we do hope to spark entrepreneurial creativity and inspire someone to produce it, its unavailability means that we have to incur more expenses and source it from China.

-Majority of Kenyans have a negative attitude towards the phrase ‘made in Kenya’ , which is sad really. As a brand that will be for the most part made and sold in Kenya, how do you plan to change this perception?

Navalayo: I don’t think that’s the case. On the contrary, we have received a lot of support from Kenyans, and many people are proud of the fact that we’ll be making these shoes in Kenya. We’ve gotten great encouragement from runners, a large amount of media interest, and even an offer of support from Brand Kenya.

-In a world that prioritizes high volume production and sales at the expense of the environment and people’s lives, how are you ensuring that your brand is environmentally and socially sustainable?

Navalayo: Positive social impact is at the core of Enda’s existence. We plan to achieve this in three ways. First, we will provide jobs and enable people to earn a decent livelihood. According to a recent World Bank report, there are 50,000 jobs for every 800,000 graduates in Kenya. Because of the Kenyan social structure where one person takes care of both his or her nuclear and extended families, providing one person with a job means that many more people will benefit from one income. Secondly, we are setting aside a portion of our profits to support local causes and innovations, in areas such as education, environmental conservation and health, that need an extra push. Access to capital is a huge challenge to entrepreneurs and by helping other small business and community causes, we hope to facilitate creativity and innovation. Lastly, we want to change the way the world sees Kenya. We are known for great wildlife and beaches, but we also want to be known for high quality products too.

Let me tell you a little something about myself. I’m actually sprinter. I was so fast in primary and high school, won so many medals and certificates.I guess this is one of those facts people include in those “20 random facts about me” types of posts. I don’t run so much(read as at all) these days but I watch the olympics and IAAF faithfully. When that start gun goes off I start wondering whether I should quit being a makeup artist.Whether I should be a runner who was a makeup artist who was a lawyer. Hmm… 😀 Anyway. Remember when Ezekiel Kemboi and Co. won number 1,2 and 3? No ? Just me? Ok. Well, I have those newspaper clippings from the 2004 olympics! Dammit Winnie. Get yourself together. You’re trying to write a post. Not give everyone your life story. 😀

As a fashionista and  runner, I am highly impressed with the well thought out design. Once I wear these babies I will tell you more about the feel and functionality.

Thing is, these shoes are not yet available for purchase. They launch in November. At the moment they have a Kickstarter campaign that is requesting for financial backing to bring the Enda Iten to the consumer.  By backing the Enda team, you get different rewards. Like, if you pledge $85 or more you will be the first to get your very own pair of Itens in your colour of choice and a beaded bracelet. The ultimate reward is a two-week training session with champions in Iten and a two-day safari in Nakuru National Park . So here’s your chance to support this Kenyan dream.

Also, to get news on the launch of the Enda Itens, sign up to their website HERE.

So the next time if someone asks you whether you prefer Nikey or Adidas, tell them Enda Iten!

Tell Me What You Think Cancel reply